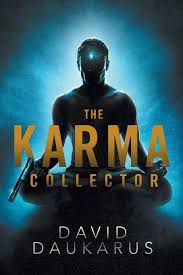 When guiding spirits lead Draden Crue off his usual path of karmic assassination, all his skills are put to the test as he is sent after one of the most untouchable men in the world.

Daukarus is skilled in using point of view to bring his novel to life. Most of the story is told in first person, but when appropriate for the narrative Daukarus can also switch into third person without confusing the reader. Main character, Draden Crue’s, prim and proper English is akin to something one might find in a Victorian novel. The constant contrast between the modern language used by other characters and Draden’s dialect provides the reader with a strong sense of how others perceive him. This language showcases the author’s skill as he creates excitement and holds the reader’s attention despite a writing style that can tend towards slow and flowery. Daukarus also demonstrates his ability to address highly politicized or sensitive topics. His transgender character explores the challenges of transformation in a neutral and realistic manner, and the author does not shy away from shining light on the horror that is human trafficking. Reader beware – although brief, there are some very disturbing scenes of child sexual abuse.

I would argue this book is not for those who only love pure action thrillers. Although it is approached from a practical or scientific angle, the metaphysical component of this novel is at least equal to, if not more prominent than the thriller aspect. There were a handful of annoying proofreading errors, the most notable being in Chapter 10 when the Draden corrects Senta on a word he’d previously used (in Chapter 9) with the wrong word. There are also times where the descriptions of Draden’s visions can seem a bit repetitive or tedious, but that is somewhat expected with old-fashioned English.

This is not your typical action thriller, though it certainly performs well as one! If you also enjoy the eloquent prose of the late 1800s, and have an appreciation for practical analysis and application of metaphysical theory, then “The Karma Collector” is a rare blend that I highly recommend.