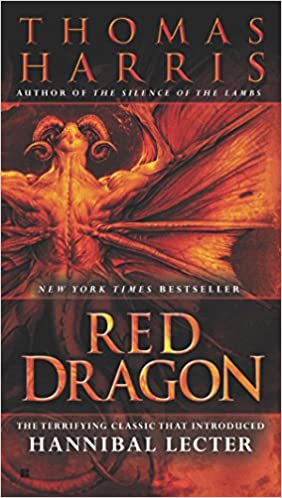 Thomas Harris’ second novel, Red Dragon, was his first to feature the now infamous character, Hannibal Lecter, but it is certainly not responsible for Hannibal’s fame. Though the novel provides a rich plot and well-developed characters, Harris’ fragmentary writing style impairs the reader’s view of the story’s depth. Fans of the popular films will find it easier to engage with the novel than readers unfamiliar with the tale, but they may also be disappointed with the rather diminutive role Lecter plays in his debut.

Francis Dolarhyde is a fastidious man discovering his power late in life through the transformational affect of ‘The Great Red Dragon.’ Will Graham retired from the FBI after the last mass murderer he caught, one Hannibal Lecter, nearly killed him in the process. Jack Crawford, head of the FBI investigation into Dolarhyde, pulls Graham unwillingly from his hard-found peace to use Graham’s unique and uncomfortable profiling gifts to find the killer. Questions arise over the sanctity of family, qualities of love, and boundaries of sanity as the three struggle against themselves and other meddlesome parties.

From page one it is evident Harris’ characters are well-developed; history shines through their interactions. Even supporting characters have noticeably complex emotional makeups. For the most part, however, Harris’ approach leaves the interpretation of this background up to the audience. Only Dolarhyde’s character seems to be explored in such depth and manner as only the written format can provide. His motivations and inner struggles are made brilliantly transparent. Several chapters are devoted to understanding how he came to be the creature he is. In film representations, the depth of his character is alluded to, but poorly illustrated, directors focusing instead on the development of characters like Graham and Lecter.

The author demonstrates an impeccable understanding of how character motivation and action interact with each other as he uses character development to drive the plot. Yet again, Harris’ writing style takes away from this. Where short sentences are intended to engage the reader, in Red Dragon they merely have the effect of cutting the reader off from the story. Important details are often only glimpsed due to the lack of description Harris provides. In some cases, details are fleshed out later in the book, a frustrating development when the information could have been useful much earlier. Other times, these handy tidbits are not shared at all, contributing to the value of the films in understanding certain references and motivations.

The sparseness of Harris’ style also damages his narrative by diminishing the emotional accessibility of his characters. Often, exchanges of dialogue between characters are devoid of useful embellishments to illustrate tone and emotion. Worse still, there are at times full pages of back and forth dialogue reliant on context to determine who is saying what. Frequent glances back half a page or more to remember who was speaking were necessary.

In the end, though Red Dragon was thoroughly enjoyable, it is difficult to claim this solely on the merits of the novel. Given that my first attempt at this work came before I saw it on screen, and the story was completely unengaging then, I can say with certainty that familiarity with the film and television series plays a significant complementary role in enjoying the novel. It provides deeper insights into characters that are less developed on screen, but less information about more popular characters than was expected. If you have an active imagination to supplement a story with, then Red Dragon may be perfect for you. For most though, I would suggest reading the book in conjunction with watching the film to maximize enjoyment of the story.