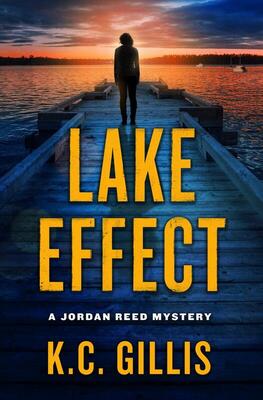 “Lake Effect” is the second full-length novel by K.C. Gillis featuring investigative journalist, Jordan Reed. Unable to stifle her inquiring instinct against a tip received from a friend, Jordan gets sucked into another high-stakes scheme where exposing the truth could mean death. Gillis’ realistically complex characters, interesting plot developments, and relevant themes (journalistic/political integrity, ambition, and loyalty to name a few) mesh into a beautifully crafted story that can easily be read as a stand-alone.

Gillis’ characters are interesting and complicated but remain believable. Jordan, for instance, is brash, stubborn, and ruthless as one might expect for her profession. Yet, she is also surprisingly introverted and earnest. Perhaps these latter qualities are what endear Jordan to the few trusted people in her life so much – enough to acquiesce to her demanding, and frequently perilous requests.

Gillis’ fresh perspective – coming from the angle of investigative journalism – allows for great story depth. Through Jordan, we explore realistic outcomes and consequences for using the borderline illegal methods sometimes required to prove a story, as well as more common complications like the involvement of organized crime. More than anything though, I enjoyed reading about journalism as it was intended: the revelation of truth to the public on matters that directly affect them. Jordan isn’t undermining military or law enforcement operations intended to protect the public through unpopular methods. She’s after the politicians, corporations, and other corrupt individuals who feel they can act outside of the law with impunity, often at the expense of public health and safety. Even though she may have to skirt the edges of the law to get the proof necessary for her stories, Jordan demonstrates a level of integrity not commonly associated with reporters.

Although “Lake Effect” did not inspire the obsessive reading habits some of the other five-star books on my reading list have, the exceptional quality of Gillis’ work and that of his publishing team left me without complaint. I thoroughly enjoyed “Lake Effect,” and highly recommend it to readers who enjoy thrillers based on back-room deals, shady politicians, and good-old-fashioned mobsters.