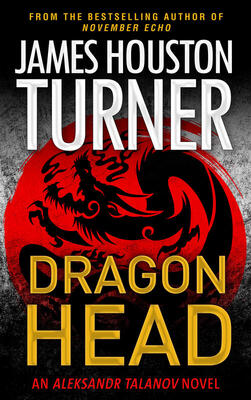 “Dragon Head” is the fourth novel by James Houston Turner featuring Aleksandr Talanov – retired KGB operative turned American spy. In this fast-paced thriller, Talanov’s attempts to embrace a “normal” life are thwarted by a past he cannot seem to escape. Turner’s multi-dimensional characters and story lines combine with comedy, tragedy and heart-pumping action to keep the reader deeply invested in the story.

Talanov’s history has dramatically influenced his personality and seems to come back to haunt him regularly. References to events in his past are well executed. Just enough relevant information is shared to inform the reader of critical facts, while simultaneously piquing curiosity about the broader story surrounding them. All this is accomplished without creating the sense of having missed anything important for the events at hand. So, although “Dragon Head” is part of a series, it reads well as a stand-alone novel.

Turner excels at creating complex, yet highly relatable characters who easily evoke tears, laughter and emotionally charged suspense. His intricate multi-layered plot is well balanced between keeping the reader guessing and being relatively easy to follow. Undertones of current events lace everything together nicely, from tensions between the USA and China to security threats posed by modern technology. This brings a fresh perspective to the well-worn American versus Soviet enemy dynamic.

The opening few chapters tend to fluctuate between gripping and boring simply due to the manner of writing, but once into the meat of the story, “Dragon Head” becomes a real page-turner. How the author sets the scenes can be a tad bit formulaic and heavy on description, no doubt contributing to the brief periods of boredom, particularly early on. There were also enough proof-reading/typesetting errors to be noticeable. Overall, despite these shortcomings being enough to warrant mention, they aren’t enough to seriously detract from the enjoyment of this great read.

“Dragon Head” was my first exposure to Aleksandr Talanov, and I am eager to seek out and devour the rest of this series. I highly recommend “Dragon Head” for action lovers who enjoy intricate plotting, emotional complexity, and relatable (though at times unpredictable) characters, such as what one may find in a Dan Brown novel.